Mexico City (CNN) The commander paces in front of a line of troops, preparing them for the day’s mission.

“We are in our country. We are in Mexico. We are enforcing our laws,” he says, his voice getting louder with each point he makes.
“Nobody is going to come here to trample on our laws,” he continues. “Nobody is going come here to trample on our country, on our land.”
Soon afterward, according to local media reports, military police from Mexico’s National Guard blocked a large group of migrants in Tuzantán, Mexico, who had been trying to head north. The caravan, made up of thousands of migrants largely from Africa, Central America and the Caribbean, was disbanded and sent to an immigrant detention camp in southern Mexico.

Mexico City (CNN)The commander paces in front of a line of troops, preparing them for the day’s mission.

“We are in our country. We are in Mexico. We are enforcing our laws,” he says, his voice getting louder with each point he makes.
“Nobody is going to come here to trample on our laws,” he continues. “Nobody is going come here to trample on our country, on our land.”
Soon afterward, according to local media reports, military police from Mexico’s National Guard blocked a large group of migrants in Tuzantán, Mexico, who had been trying to head north. The caravan, made up of thousands of migrants largely from Africa, Central America and the Caribbean, was disbanded and sent to an immigrant detention camp in southern Mexico. 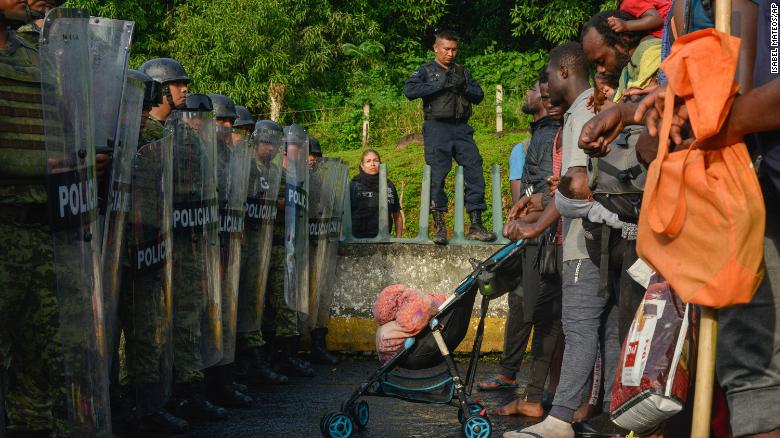 Yes, US taxpayers have been footing the bill for efforts to build new physical barriers at the US-Mexico border.
But experts note that Mexico’s massive deployment of National Guard troops over the past few months has played a major role in blocking migrants from reaching the US border in the first place.
It’s a point Trump himself has made at several recent events — a dramatic change in tone from his sharp criticisms of Mexico earlier this year.
“I would like to thank President López Obrador of Mexico for the great cooperation we are receiving, and for right now putting 27,000 troops on our southern border,” Trump told the United Nations General Assembly last month. “Mexico is showing us great respect, and I respect them in return.”
A few days later, Trump told reporters he was “using Mexico to protect our border” because Democrats weren’t doing enough to fix the immigration system.
And last week, acting US Customs and Border Protection chief Mark Morgan praised Mexico on Twitter, sharing a news story about the October 12 operation to turn back the latest caravan.
“Mexico’s enhanced border security efforts along their southern border continue to have a dramatic impact on this regional crisis,” he wrote. “I just returned from Mexico where we had collaborative discussions on stemming the flow of illegal migration throughout the region.” 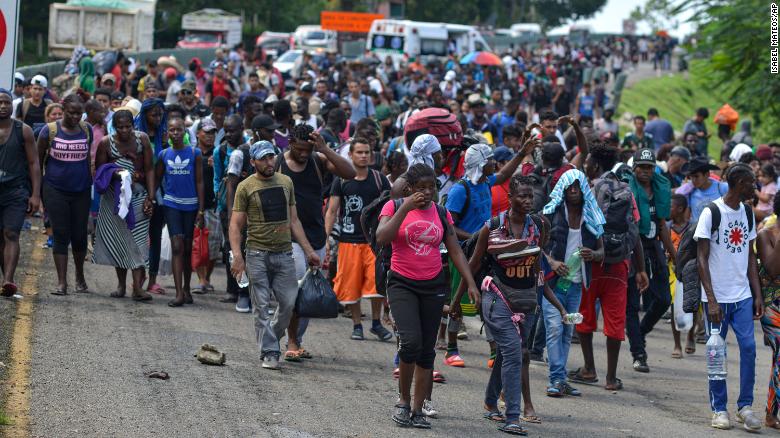 Migrants from Africa, Cuba, Haiti, and other Central American countries set out from Tapachula, Mexico, on October 12, hoping eventually to make it to the US-Mexico border.
Not everyone is praising the increased collaboration.
The recent video of the National Guard’s response to the caravan of migrants from Central America and Africa drew backlash on social media.
“We criticize Trump for his anti-immigrant stance and our National Guard is doing exactly the same thing,” tweeted Mexican columnist Denise Dresser, who has criticized the troops’ response to migrants in the past.
In a recent New York Times column — headlined “Mexico is the wall” — Univision anchor Jorge Ramos noted that Trump’s comments that he was “using Mexico” had riled many Mexicans.
“It’s true: President Trump is using Mexico. And, against all logic, Mexico is letting him get away with it,” he wrote. “This has to change.”

Asked to respond to claims that Mexico is effectively paying for the wall Trump wanted, foreign ministry spokesman Roberto Velasco told CNN that migration flows have notably decreased in recent months, and that efforts continue for a regional development plan to address the root causes of migration in Mexico, El Salvador, Guatemala and Honduras.
“The number of migrants presented before Mexican authorities has decreased by 70% from June to September,” he said.
The decrease, he wrote in a recent letter to the editor published in Mexico’s El Universal newspaper, came as a result of Mexican legislative efforts and a push to strengthen the rule of law in southern Mexico.
As the Trump administration threatened to impose tariffs, Mexican officials in June agreed to step up their country’s immigration enforcement.
López Obrador has said he had no choice but to negotiate.
“We represent our country with dignity, and we have nothing to be ashamed of,” he said in September. “The sovereignty of Mexico is defended. At the same time, we do not want confrontation. We have a frank, open hand extended to all the governments of the world, and we embrace all the peoples of the world, and we are especially interested in a good relationship with the United States.”
Nearly 15,000 troops are deployed to Mexico’s northern border, where they’ve set up 20 checkpoints, Mexican Defense Minister Luis Cresencio Sandoval said last week at a press briefing on the country’s security strategy. At the southern border, 12,000 troops are deployed and have set up 21 checkpoints.
Military helicopters regularly conduct aerial reconnaissance in both border regions, he said. So far, Cresencio said, more than 60,000 migrants have been intercepted as part of the effort. 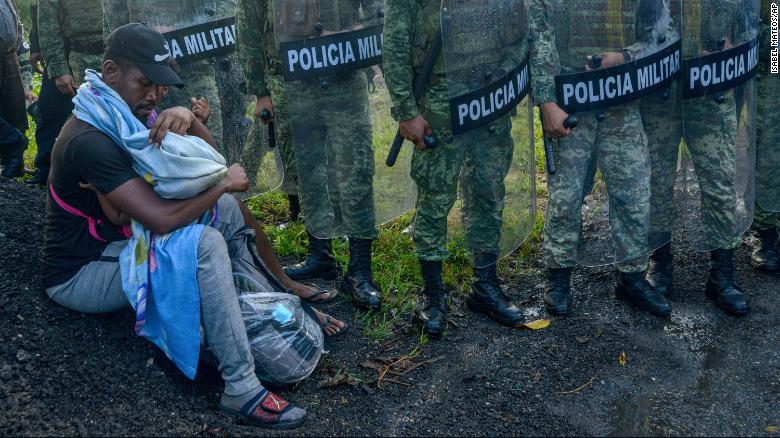 A migrant tends to a child while surrounded by members of the National Guard near Tuzantan, Mexico, on October 12.
At the same press conference, officials noted that the number of migrants seeking asylum in Mexico has increased dramatically, with some 80,000 asylum applications expected by the end of this year.
Officials also touted Mexico’s first transatlantic deportation flight last week. A charter flight with more than 300 Indian nationals aboard flew from Toluca, Mexico, to New Delhi, Mexico’s National Migration Institute said Wednesday.

‘The message on the ground’

Analysts told CNN the video of efforts by Mexican authorities to block the recent caravan is a revealing window into how Mexico’s shifting policies are unfolding.
“The message given is that Mexico is not interested in protecting people that are in need,” says Gretchen Kuhner, director of the Institute for Women in Migration, a Mexican advocacy organization. “The message given by this general is not the official message of the government, but it explains very well what the message on the ground is.”
Ana Maria Salazar, a former US deputy assistant defense secretary who’s now a security analyst based in Mexico, says images of the operation illustrate concerns critics had when Mexico’s National Guard was swiftly formed and deployed this year.
“This is someone who was trained to protect the national sovereignty, not someone who handles migrants. And these are the worries in forming a National Guard so hastily,” she said. “You can’t expect that from one day to the next, a soldier that is trained to protect the territory against enemies of the state will now be responsible for people that are trying to cross illegally into the country. These are very different missions and this is reflected in the images and what the commander says.”
Facebook Comments

We have no tolerance for comments containing violence, racism, profanity, vulgarity, doxing, or discourteous behavior. If a comment is spam, instead of replying to it please hover over that comment, click the ∨ icon, and mark it as spam. Thank you for partnering with us to maintain fruitful conversation.

Trending Now on We Build the Wall News

Related Topics:featured
Up Next

The first incident occurred during the early morning hours of May 23, when a box truck approached the checkpoint on Interstate Highway 35 north of Laredo. During an immigration inspection of the driver, a Service canine alerted to the vehicle. Agents discovered 13 individuals hidden inside who were all illegally present in the United States from the country of Mexico. The individuals and the driver, a U.S. Citizen, were taken into custody pending investigation.

The second incident occurred several minutes later, when agents encountered a box truck at the checkpoint west of Freer, Texas. During an immigration inspection, a Service canine alerted to the cargo area of the vehicle. Agents found an access panel that led to the discovery of an aftermarket compartment where 10 individuals were hiding. All 10 were in the country illegally and from Mexico. The individuals and the driver, a U.S. Citizen, were taken into custody pending investigation.

Despite the threat of the COVID-19 pandemic, smugglers continue to endanger the lives of individuals they exploit and the health and safety of our Nation. U.S. Border Patrol agents strive to prevent the flow of illegal immigration and slow the spread of COVID-19.

Story compiled by Jeff Rainforth for We Build the Wall, Inc. Follow Jeff on Facebook for live border videos & coverage.

DONATE NOW TO BUILD THE WALL WITH BRIAN KOLFAGE, CLICK BELOW:

The incident occurred at approximately 3:40 p.m., when a man driving a grey 2007 Freightliner semi tractor-trailer approached the checkpoint. During an immigration check on the driver in primary inspection, a Border Patrol canine detection team alerted to the cargo area of the trailer. The driver was referred to secondary for further inspection.

During secondary inspection, Border Patrol agents inspected the cargo area of the tractor-trailer and discovered 12 illegal aliens locked inside with no safety restraints and no way to extricate themselves from the inside. Agents safely removed all of the subjects and conducted welfare checks.

The driver, a 36-year-old illegal alien from Mexico and 12 illegal aliens, which included 10 adult men, and 2 adult women, were placed under arrest.

The driver was processed administratively for alien smuggling and all 12 illegal aliens were expelled back to Mexico.

This incident is the seventh of its kind this year in the Imperial Valley and the second this month. On the first week of May, El Centro Sector agents discovered 6 smuggled immigrants in a hydraulic dump trailer hauled by a semi-truck.

DONATE NOW TO BUILD THE WALL WITH BRIAN KOLFAGE, CLICK BELOW:

Facebook Comments
Continue Reading
Send this to a friend